The Bahamas contains three major shallow (<10 m) carbonate platforms or banks, each separated by deep ocean passages, along with a number of smaller emergent land masses. The archipelago encompasses close to 15% of all shallow water coral habitats in the Tropical Western Atlantic and contains more than 700 islands overall. It extends approximately 1600 km from the Little Bahamas Bank in the northwest to Navidad Bank in the southeast, covering an area of approximately 122,000 kmÇ (Trumbull 1988, Banks 1999, Sullivan Sealey and Bustamante 1999). It covers 6 degrees of latitude and 9 degrees of longitude, representing the largest shallow water bank system in the insular Caribbean/Western Atlantic. Marginal habitats such as sand, seagrass, and hard bar dominate the shallow water bank systems, while true, accreting reefs on the bank margin occupy a relatively small area overall.

Cay Sal Bank, the third largest bank in the Bahamas, is an isolated, submerged carbonate platform surrounded by deep water. It lies relatively close to the Florida Keys and Cuba, yet is remote, difficult to access and relatively unimpacted by man. Cay Sal Bank has been referred to as a drowned atoll (Agassiz 1894), although it is of a different geologic origin and is not formed around a submerged volcano. The bank is roughly triangular shape, with a base along the south rim of 105 km, a width of 66 km north-south, and a total area of over 6000 km2 (Goldberg, 1983). Over 99% of the bank is submerged, ranging in depths from 5-16 m. There is a narrow fringe of emergent land that forms a rim around the perimeter, and surrounds a central lagoon. Land masses are comprised of small sandy vegetated islands, rocky outcrops, and lithified sand dunes. Numerous channels are found between the cays; these vary in width and depth but allow tidal exchange between the central lagoon and the oceanic waters of the outer bank margin. The outer margin is rimmed by discontinuous coral reef development.

There have been few previous studies conducted on Cay Sal Bank, The most comprehensive and recent assessment of shallow marine environments of Cay Sal was completed in 1982 (Goldberg 1982). This study combined aerial photography and in water assessments to characterize the distribution and spatial extent of various habitats and the dominant fauna. Of note, Goldberg (1983) highlighted the extensive seagrass bed communities and relatively depauperate and poorly developed reef systems. The current study, carried out by the Khaled bin Sultan Living Oceans Foundation, used Worldview2 multispectral satellite imagery and detailed groundtruthing to characterize and map shallow marine habitats. These efforts were complimented by quantitative transect surveys of coral reef habitats located within the bank and on the outer perimeter of the bank, from 7-25 m depth. 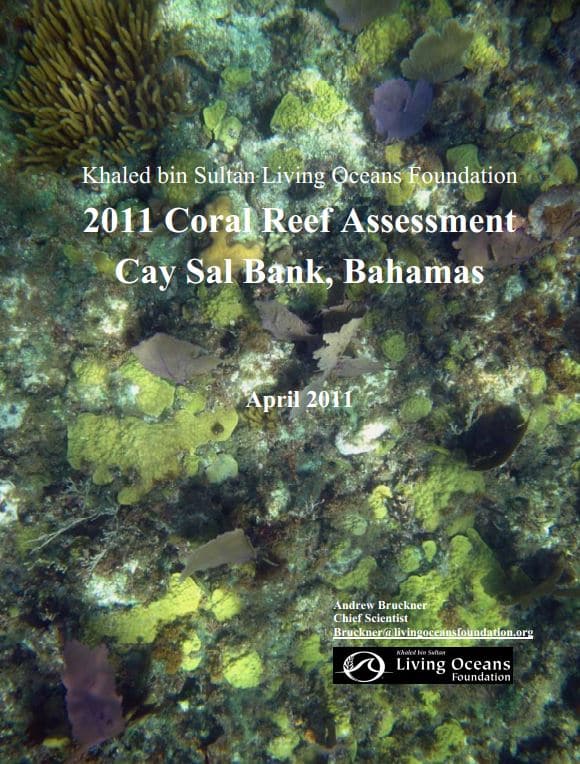