Far out in the Caspian Sea, off of the coast of Azerbaijan, stands the floating town of Neft Dashlari, an impressive network of 2,000 oil platforms connected by miles of road.

Constructed during the post-WWII era by the USSR’s top engineers, this once thriving oil town was home to approximately 5,000 Soviet workers. There was a cinema, a park, and rows of apartment houses.

“It was a Stalinist utopia for the working class. A Soviet stamp from 1971 summed up the gigantic hopes it embodied in a tiny image: against the black outline of a drilling rig, a road made of bridges snaked its way across the deep blue sea towards further rigs and a red sun on the horizon,” writes Arno Frank for Spiegel International.

That was then, this is now. Neft Dashlari is now little more than a closely guarded ruin.

“[T]here are few things as precarious as a world built on water and oil. The collapse of the Soviet Union ushered in the decline of this floating city as new oilfields were discovered elsewhere and the price of oil began to fluctuate,” Frank adds.

“The workforce has halved to 2,500, and most of the rigs are now out of use or can’t be reached because the bridges leading to them have collapsed. Of the 300 kilometers of roads, only 45 kilometers remain usable, and even they have fallen into disrepair. During a flood a few years ago, many apartments were submerged up to the second story,” he adds.

Here are some eerie photos of the former Soviet Union’s once proud engineering marvel [captions via Spiegel]:

Hokhsbat Yusifzadeh, vice president of Socar, the state-owned Azerbaijan oil company, worked on Neft Dashlari in the early days. “We were pioneers in those days, and the oil flowed in huge quantities, he says. He has fond memories of the time. “Don’t forget there were many women on Neft Dashlari, and the evenings were long at sea.” (AP)
Check out These Photos of Neft Dashlari, the Floating City | Engineering Marvel | Soviet Union | Joseph Stalin | USSR

On February 18, 1951, the first fully-laden oil tanker left Neft Dashlari for the mainland in a grand ceremony. In the 1960s, the installation’s output peaked at 21 million tons a year. (AP)
Check out These Photos of Neft Dashlari, the Floating City | Engineering Marvel | Soviet Union | Joseph Stalin | USSR

This hotel still stands on Neft Dashlari. Dismantling the vast steel and concrete island would probably be more expensive than to simply keep it going. (PD)
Check out These Photos of Neft Dashlari, the Floating City | Engineering Marvel | Soviet Union | Joseph Stalin | USSR

Today the workforce amounts to 2,500, half its size in Soviet times. The water is slowly reclaiming the vast island, and only 45 kilometers of roads remain usable. Many of the buildings are flooded. (Getty)
Check out These Photos of Neft Dashlari, the Floating City | Engineering Marvel | Soviet Union | Joseph Stalin | USSR

Large parts of the island resemble the set of an action movie. But oil is still produced here. Experts say the reserves will dry up in 20 years. (Getty)
Check out These Photos of Neft Dashlari, the Floating City | Engineering Marvel | Soviet Union | Joseph Stalin | USSR

Stalin’s Atlantis was a proud secret of the Soviet Union. The foundation of the main settlement consists of seven sunken ships including “Zoroaster,” the world’s first oil tanker, built in Sweden. Eight-story apartment blocks were built for the 5,000 workers who sometimes spent weeks on Neft Dashlari. The island had its own beverage factory, soccer pitch, library, bakery, laundry, 300-seat cinema, bathhouse, vegetable garden and even a tree-lined park for which the soil was brought from the mainland. (Getty)

“A worker on Neft Dashlari still earns some $130 a month, twice as much as someone employed in the same job on the mainland,” Frank adds. “But the plant hasn’t been operating efficiently for years. Submerged steel constructions pose a threat to shipping, oil leaks abound and equipment is falling apart.”

Simply put, Neft Dashlari is in shambles. But for reasons that are unclear, the town is still closely-guarded by Russian authorities.

Don’t take our word for it. Go ahead, Google Map the floating wonder. Let us know what you find.

Does the oil town have a future?

“There were plans to refurbish Neft Dashlari and even to transform it into a tropical luxury holiday resort, but nothing has come of them. Today, it accounts for only a fraction of Azerbaijan’s oil production. Experts estimate that the oil deposits underneath the city will only last for another 20 years,” Frank notes.

“In a few decades, rusting steel jutting out of the waves and old seacharts will be all that remain of this gigantic labyrinth in the sea,” he concludes. 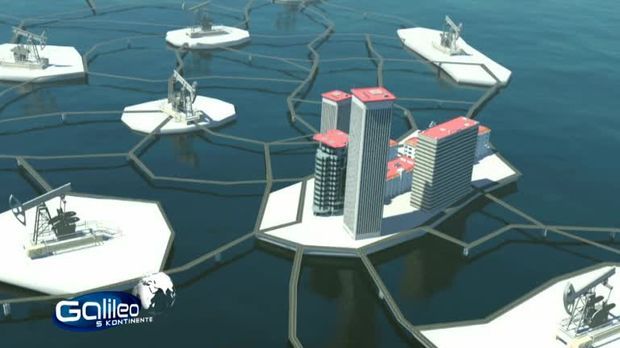